Is The Plaster In Your New Home Ready To Paint? 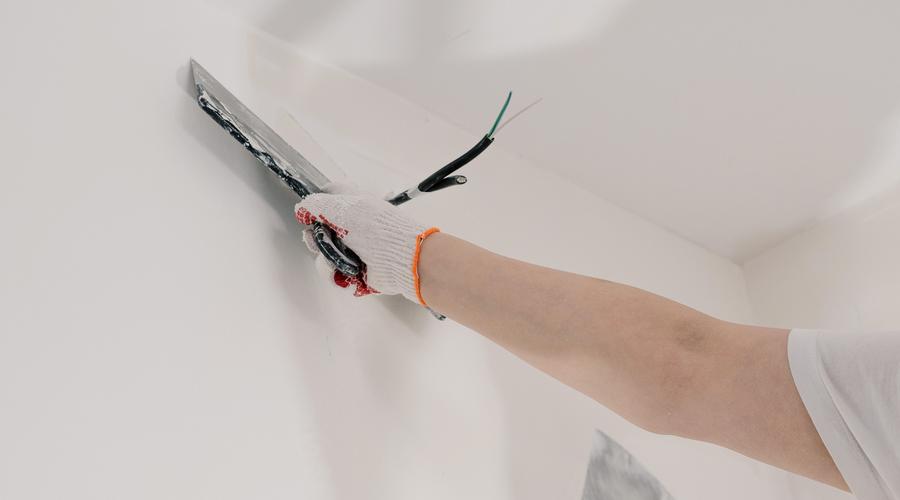 General
When painting set plaster, account should be taken of its inherent differences from most other substrates.

Our inspectors at ABEL building Inspections check this out at Practical Completion Inspection to make sure all is well with your walls prior to painting.

It is not a standardized, controlled manufacturing process, like plasterboard. Neither it is an inert material, like clay bricks, nor is it a wet-mixed masonry material of familiar composition and properties, like mortar or concrete.

Rather it is the product of a chemically reactive mixture of ingredients selected by the individual applicator (plasterer/renderer).

The composition is likely to vary with the depth of the plaster and also across the surface of each layer within the setting. Even where the composition is relatively constant, the mechanical properties may vary, e.g., due to the plaster mix having been applied or worked after components of relatively rapid setting time, such as cement or gypsum, began to set.

While there are two distinct binders, namely lime and gypsum, commonly employed in the setting or finishing coat of plaster to which paint is applied , there is no clear distinction between · lime plaster ' and 'gypsum plaster as far as painting is concerned, because these terms reflect only the predominant component of the binder.

Setting coats are rarely if ever based on only one of these binders; instead, they are combined in proportions designed to influence properties such as \-Workability, setting time and surface hardness.

The two extreme cases of a setting coat based on only one binder or the other would show the following properties:

Some properties, however, may be unaffected by combination with another binder; for example, the working time of the gypsum component remains very short, and the carbonation of the lime component remains very slow. There is a range of factors that may require attention prior to painting. In the period following the setting of the plaster, residual moisture, alkalinity, and efflorescence may need to be considered. Even when the plaster has been stabilized by time, moisture may have ingressed through structural or design failure, and deficiencies in the soundness (cohesion and adhesion), and evenness of the surface (roughness, patchiness, or cracking) may have developed with aging or structural movement).

Before painting , especially where solvent-borne paints or other relatively impermeable coatings are to be applied, it is advisable to test the plaster with a moisture meter to ensure that the moisture content at the surface does not exceed the acceptable limits for painting (see Note). Latex systems are more tolerant of moisture; however. High concentrations of moisture may cause salt transfer (efflorescence) and blistering.

NOTE: Care should be taken when specifying moisture contents, as different readings may be obtained with the various types of proprietary instruments. A suitable procedure is to trial the meter to be used on some aged, fully cured plaster which shows no evidence of moisture problems , in order to establish a baseline figure, then to monitor the new plasterwork as its moisture readings decline towards this baseline figure. If the moisture readings remain elevated, particularly in well-aged plaster (many months or years old), then the possibility of moisture ingress should be investigated and eliminated or rectified.Moisture ingress into previously painted plaster may be detectable without the use of a moisture meter, through effects such as blistering of the coating, efflorescence below or on top of the coating, mould growth on the coating or the plaster, and softness or disintegration of the plaster.

Alkalinity throughout the plaster due to the presence of lime and/or cement will decline slowly from an initial pH in excess of 12 to around 9.5. This may not happen on the same time scale as loss of residual moisture. The recommended minimum drying times for cementitious substrates may be used as a guideline, with an allowance for lime carbonating more slowly than cement. If the plaster has not been fully and uniformly incorporated to eliminate lumps, there may be spots of very high alkalinity, which will decline only very slowly. The difference in properties from the surrounding plaster may cause blowing or popping of the plaster over these lumps. Where detected, they should be dug out and the holes stopped up.

Salt, generally alkaline, may be transported to the surface of plaster by the movement of moisture to a surface from which it can evaporate. Efflorescence due to residual moisture will cease naturally as the plaster cures, whereas efflorescence caused by moisture ingress may continue indefinitely while there are salts present to be transported, unless the source of moisture ingress is detected and eliminated, whereupon the decline in moisture levels and cessation of efflorescence will proceed as for residual moisture. The cessation of efflorescence may be ascertained by brushing or wiping an affected surface free of existing efflorescence, then waiting for a reasonable period to ensure its continuing absence.

NOTE: Premature painting of plaster may cause major and extended problems. If paint is applied to new set plaster that has not had sufficient time to reach a stable equilibrium with regard to hardening, moisture, alkalinity and efflorescence, there will be a lack of hardening and the residual moisture and alkalinity will affect the integrity and adhesion of the coating through blistering, efflorescence and other defects. In addition, the presence of any coating will reduce the rate of moisture loss from the plaster and the rate of ingress of carbon dioxide into the plaster, thus lengthening the time required to achieve equilibrium and full curing. In the event of incompletely cured plaster causing some form of paint failure, rectification will generally require the plaster to be allowed to cure fully, which may in turn require the coating system to be removed. Removal may damage the plaster surface, requiring its reinstatement, thus setting the time of curing back to zero.

Painters should resist any form of pressure to paint plaster prematurely unless a statement of release is obtained, which transfers consequential risks to the party applying such pressure.

Moisture ingress generally becomes apparent in new plasterwork as a failure of moisture levels to decline as expected despite conditions being adequate for such moisture loss to occur, i.e. , in terms of time , temperature, relative humidity and ventilation rate. The source of moisture should then be traced and rectified before moisture levels can decline to a normal equilibrium. Any side effects of the elevated moisture levels, such as disintegration of the plaster or mould growth, should also be rectified before proceeding to paint.

After plaster has been found to be sufficiently dry and cured, it should be assessed for the state of its mechanical soundness. A surface that appears to be solid (i.e., holding its shape under the stress of gravity) may still be unsound due to poor cohesion or adhesion anywhere within the bulk of the solid material. Soundness cannot be assessed by visual inspection but only by testing for responses to selected localized stresses applied to the surface and intended to reveal various types of unsoundness within. A lack of soundness may take various forms, such as drumminess (looseness of the setting coat or another coat within the set), incoherence (softness due to lack of cohesion or binding), and powderiness (surface dusting).

Drummy patches occur where there has been a failure of adhesion between a pair of layers within the sequence that constitutes the plastering system, namely the substrate, rendering coat (or dash coat), floating coat, and setting coat. Such failures of adhesion may have numerous possible cause s, including lack of suitability of the substrate and its preparation, of the mix used in one or more layers or of the initial drying conditions. Drumminess is detected by lightly tapping the surface and listening for a dull, hollow sound. If the failure is close to the surface, the pitch of the sound will be higher and only light tapping will be required to create a vibration in the loose plaster. If the failure is close to the substrate, the pitch of the sound will be lower and firmer tapping will be required to create a vibration. The closer the failure to the surface, the least stress will cause failure in service. For example, a patch of shallow drumminess might be cracked or dislodged with only a light knock from a solid object, such as a broomstick, whereas a patch of deeper drumminess may require a firm blow from a heavy object to dislodge it, such as hammering in a picture ho o k. Ideally, all drummy patches should be cut out replastered and allowed to cure before painting.

In practice, however, many patches of deep drumminess have endured years or decades of service without being detected or causing a problem, and it is patches of shallow drumminess to which rectification should first be directed. Excessive efforts to eliminate indifferently adhering plaster in one location ma y result in impairing the immediately adjacent sound areas.

Incoherence of the plaster may be due to disintegration of an initially coherent plaster through prolonged ingress of moisture, in which case rectification should only proceed after the source of moisture ingress has been traced and eliminated.

Alternatively , it may be a case of initial incoherence or failure to set hard , with possible causes such as insufficient binder in the mix, working past the setting time of a rapid setting binder, or adverse drying conditions . Incoherence may be suspected during testing for drumminess, where tapping yields a dull but not hollow sound. It can be confirmed by pressing with a hard object, whereupon soft plaster will crumble around the point of the implement. Scraping with a hard object gives a better confirmation, but should not be carried out injudiciously or without first testing by other means, in order to avoid unnecessary damage to normal plaster.

In extreme cases, the plaster will crumble away under the pressure of a finger firmly rubbing the surface while checking for powderiness. Incoherence in one of the subsurface layers of plaster may not be detected by localized pressure on the surface but may be the cause of drumminess.

Rectification consists of removing the unsound plaster until a sound surface is reached, then replastering and allowing the plaster to cure before painting.

It is important to distinguish between these possible cases. Since dust on the surface may affect the ability of paint coatings to adhere to the plaster, tape adhesion tests have often been used in an attempt to determine the fitness of the surface for painting; however, the results of such adhesion tests may be misinterpreted. Adhesive tape will adhere to whatever is present on the surface. If this is a layer of loose dust, then some of that layer will be removed when the tape is pulled off, without transmitting the full pull-off stress to the remainder of the plaster below. This illustrates a fundamental weakness of tape adhesion testing directly on plaster surfaces, in that if the tape removes any plaster or dust, then the test indicates little or nothing about the plaster below the level from which material was removed. On the other hand, in case s where no plaster is removed by the tape, the stress induced by pulling off the recommended grade of tape is not sufficient to indicate soundness throughout the plaster. A reasonable interpretation of adhesive tape tests on plaster from which loose dust has been removed by wiping or brushing is as follows:

Previous PostThe Consequences of Condensation
Next PostStructural Defects and Their Meanings